Tokyo Olympics – By the Numbers (for Event Geeks)

The Tokyo Olympics may be the largest audio-visual event to ever be broadcast around the world. With many events running without live audiences and even family members of competitors having to stay home because of the pandemic, Olympic Broadcasting Services (OBS) were faced with one of the greatest challenges ever–to offer a production as immersive as being there yourself.

And oh, how they have risen to the challenge. With the latest advancements in audio-visual technology and a massive team of talented people, the OBS provided a way to experience the 339 individual events in a way never before seen.

A Quick Glance at Impressive Numbers
The numbers almost speak for themselves; for the biggest broadcast, the Olympics have ever seen, OBS used an infrastructure larger than any other. 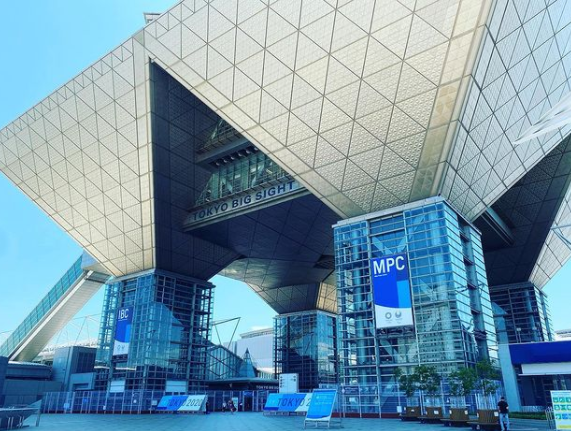 Looking closer, however, we come to realize how OBS built a system through careful decision-making, great staff, and the best technology available.

The Highest Quality Images Ever

For the 2016 Rio Olympics, we got to see high-definition video playback of all our favorite events. For 2021, we got 4K and even 8K cameras, offering over four times the quality of those pictures from only five years ago. These were captured by over 1,049 camera systems, 27 tracking camera systems, and 37 jibs and cranes. These include cameras connected to cars, flying besides runners, and even underwater. Between them, they covered dozens (and sometimes hundreds) of perspectives for over 4000 hours of content (which will later be edited and produced to double that number). 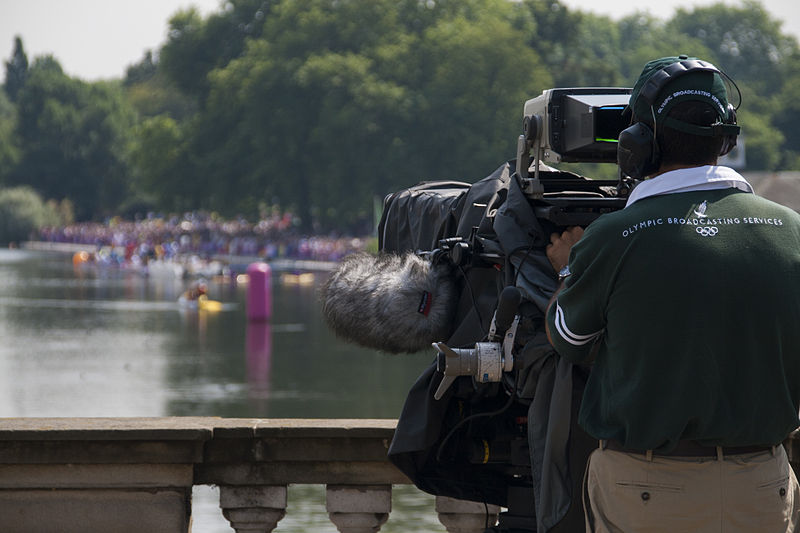 The OBS didn’t settle for simply the sharpest images available. Nor did it settle with the 5.1.4 surround sound (which captures sound vertically from four extra perspectives). No. In 2021, the OBS also captured images and other data for audiences that we haven’t experienced before.

For the first time ever, the Tokyo Olympics included Live and on-demand immersive 180° stereoscopic and 360° panoramic coverage. From AI that produces 3D modeling at the gymnastics to vital sign monitors that show the heart rate of archers, the Olympic Broadcast team offered us an immersion beyond anything we could expect while sitting in the stands. 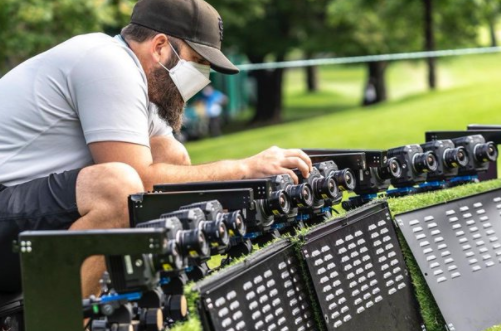 [Image: A golf tournament can take dozens of cameras to capture. Source: Twitter/@GarageUganda]

When you talk about high-quality images, you end up talking about large amounts of data. The minimum streaming bandwidth for 4K cameras is around 25Mb/s, over the typical bandwidth available on 4G. With up to 64 streams entering the main center at any one time to be processed before being added to the OBS cloud, the infrastructure required has to be massive!

That is why OBS partnered with Alibaba and uses its own next-gen 5G network to process and release thousands of terabytes of data to its partners every hour. 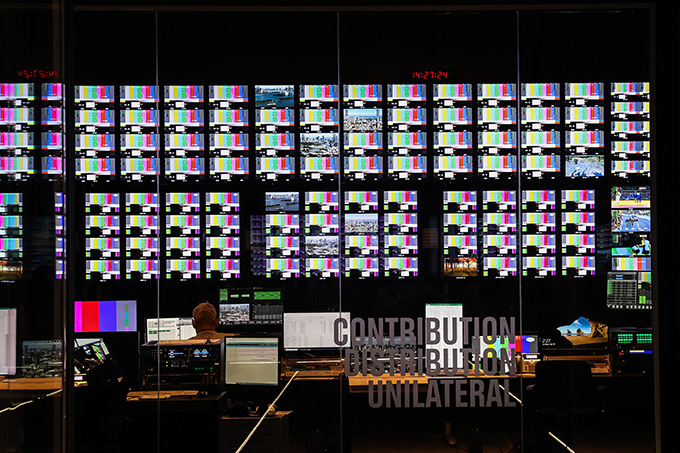 The Best Events Team in The World?

Of course, no event recording succeeds without a strong and competent events management team. While the planning group comprises 166 people from 30 nationalities, the number of employees during the Olympics ballooned to over 8100. These included cameramen, gaffers, sound engineers, editors, producers, and drivers. Believe it or not, 120 employees dedicated their days simply to labeling footage to be used; these people were even so busy that they employ AI to help them! 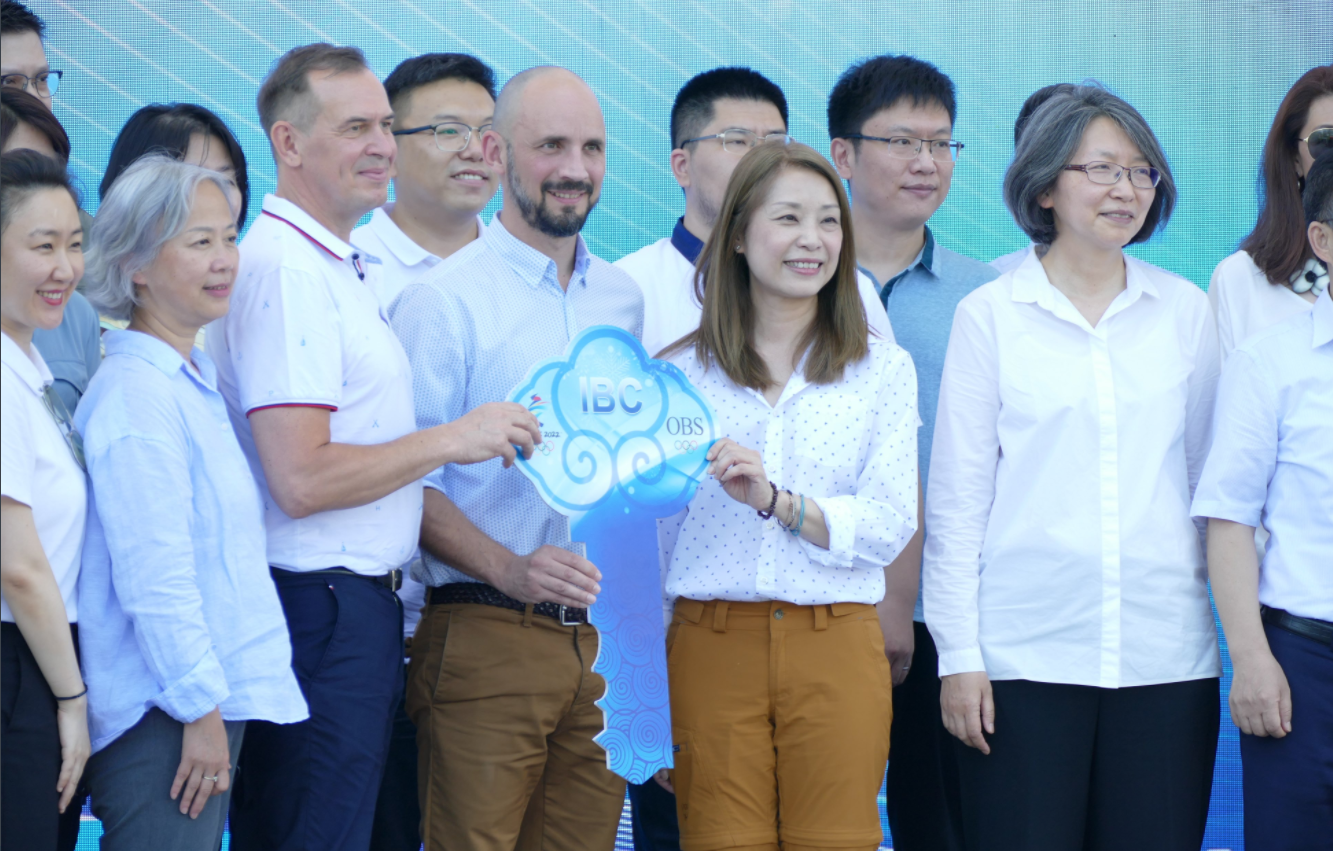 Can I have Olympics Level Coverage at My Event?

Let’s be real. You don’t need this level of coverage. Very few live events outside of the Olympics do. However, most corporate live event managers don’t realize that a lot of the experiences Olympic audiences view can actually be reached within their budget. Here at Decibel Event Management, we work to provide this level of production in all of our event productions. From our live event broadcast production with live streaming from multiple cameras and perspectives, to IP cloud integration, and from design through execution.

Want to see more? Check out the 2021 National Book Festival this September to see our work in action – including both live and virtual audiences. We have been the Event Agency of Record for over a decade, and also work with other corporations on their large-scale events and meetings to bring them this level of production and to give them the opportunity to have global-level productions at a budget they can afford.

NBC’s Olympics – The Technology Behind The Triumphs

Tokyo Olympics – By the Numbers (for Event Geeks)